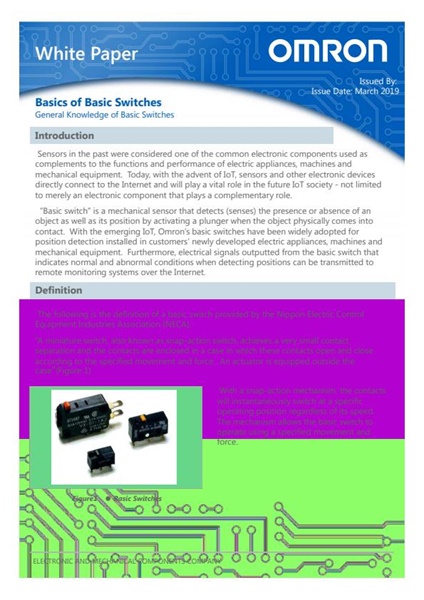 Sensors in the past were considered one of the common electronic components used as complements to the functions and performance of electric appliances, machines and mechanical equipment. Today, with the advent of IoT, sensors and other electronic devices directly connect to the Internet and will play a vital role in the future IoT society - not limited to merely an electronic component that plays a complementary role.

Basic switch” is a mechanical sensor that detects (senses) the presence or absence of an object as well as its position by activating a plunger when the object physically comes into contact. With the emerging IoT, Omron’s basic switches have been widely adopted for position detection installed in customers’ newly developed electric appliances, machines and mechanical equipment. Furthermore, electrical signals outputted from the basic switch that indicates normal and abnormal conditions when detecting positions can be transmitted to remote monitoring systems over the Internet.

Submit
Please agree to the conditions

By requesting this resource you agree to our terms of use. All data is protected by our Privacy Notice. If you have any further questions please email dataprotection@headleymedia.com .

In order to provide you with this free service, we may share your business information with companies whose content you choose to view on this website.